Today’s Throwback Thursday poem is “Wherever,” from David Ignatow’s 1996 collection I Have a Name. The book was the winner of the 1997 William Carlos Williams Award from the Poetry Society of America. 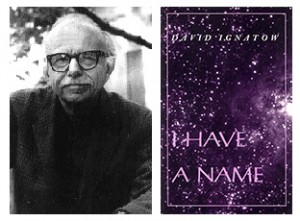 Wherever I go,
into food stores,
into the john to piss,
I am haunted by the poem
yet to be written,
that I may live as a poem
when I die as a man.

What does he want of himself?
How to write without reservation,
yet without repugnance,
so that to value writing—
teeth, tongue, and terror—
he will accept the terror.

DAVID IGNATOW (1914-1997) was the author of many books of poetry, including Rescue the Dead (1968), Against the Evidence: Selected Poems, 1934-1994, and Shadowing the Ground (1991). He served as editor of American Poetry Review, Analytic, and Chelsea Magazine, as well as poetry editor of The Nation. His honors include the John Steinbeck Award, the Shelley Memorial Award, a Bollingen Prize, and the Frost Medal. He was the president of the Poetry Society of America from 1980 to 1984.