This week’s selection for Throw Back Thursday is “A Muse” from Don Bogen’s collection The Known World (1997). Another volume, Luster (2003), is also available from Wesleyan University Press. 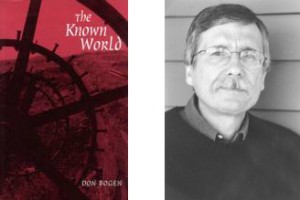 Everything that’s new is old. Everything old
sags with the layering distortions of our looking.
Sad, baggy world, the past in its nostalgic hats
no one ever wore, stacks of gloves and roiling hemlines,
stumbles with the burdens we’ve heaped up over
its plundered core.
Look at her—
she can’t tell you day from night and, wandering,
she turns up everywhere. She feels at home,
is always wrong. When dawnlight finds her
propped in a doorway, she seems anomalous
yet comfortable, a bizarre lost cousin
whose name we can’t recall.
What if
she sleeps on grates, bathes in the library?
She is bold, oblivious, a spirit
of indiscriminate accumulation. Heroes, gods,
wars and glories, whatever we forget
is in her waving. Shiftless, ever resourceful,
she blesses us.
So the high-tech space fantasy
glowig on the screen gets sprinkled
with villainous Gothic dwarfs, Restoation
masks on sticks for decadence, and robots
with scimitars. So the slave-owning neoclassical founders
are conjured to fine-tune the Republic.
Anything goes. In the free dream of anachronism
she skirts the edge of the trash compactor,
gorged with its droppings, finding her tattered filigree
in the dappled remains.
Don’t stare—
she wears your speculation like a nightgown.
The eyelet trim is dangling, the silk belt
droops a frayed tail. When wind cuts
through the peignoir’s multiplying peek-a-boos,
she winks, alert in her cast-offs,
promising once again the comfort
of something you’ve never seen.

DON BOGEN is currently McMicken Professor of English & Comparative Literature at the University of Cincinnati and serves as poetry editor of The Cincinnati Review. He is the author of Luster (2003), The Known World (1997), A Necessary Order (1991) and the prize-winning book of poetry, After the Splendid Display (1986). In addition to his work in poetry, Don Bogen is active as a translator and has collaborated with composers in the U.S. and abroad. His versions of the work of contemporary Spanish poet Julio Martínez Mesanza have appeared in Boston Review, Pleiades and other journals, and in 2008 he was awarded a Witter Bynner Poetry Translator Residency at the Santa Fe Arts Institute. Bogen has given many readings, talks, and workshops across the U.S. and in Europe.