Wesleyan is pleased to announce the second edition of this intimate portrait of the Afrobeat legend.

Fela: Kalakuta Notes by John Collins and with a foreword by Banning Eyre is an evocative account of Fela Kuti—the Afrobeat superstar who took African music into the arena of direct action. With his antiestablishment songs, he dedicated himself to Pan-Africanism and the down-trodden Nigerian masses, or “sufferheads.” In the 1970s, the British/Ghanaian musician and author John Collins met and worked with Fela in Ghana and Nigeria. Kalakuta Notes includes a diary that Collins kept in 1977 when he acted in Fela’s autobiographical film, Black President. The book offers revealing interviews with Fela by the author, as well as with band members, friends, and colleagues. For the second edition, Collins has expanded the original introduction by providing needed context for popular music in Africa in the 1960s and the influences on the artist’s music and politics. In a new concluding chapter, Collins reflects on the legacy of Fela: the spread of Afrobeat, Fela’s musical children, Fela’s Shrine and Kalakuta House, and the annual Felabration. As the dust settles over Fela’s fiery, creative, and controversial career, his Afrobeat groove and political message live on in Kalakuta Notes. Features an up-to-date discography by Ronnie Graham, a timeline, historical photographs, and snapshots by the author. 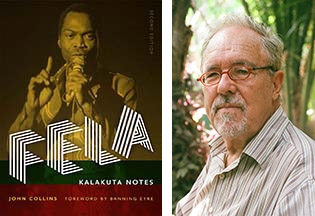 John Collins moved to Ghana from Britain in 1952. He has been actively involved in the wider West African music scene since 1969, as a musician, bandleader, record producer and engineer, music union executive, writer, and archivist. He is currently a professor of popular music at the University of Ghana in Legon. Banning Eyre is the author of In Griot Time and a forthcoming book on the Zimbabwean musician Thomas Mapfumo. He is senior editor for Afropop.org.

“John Collins has given us a vibrant and multifaceted portrait of Afrobeat legend Fela Anikulapo-Kuti, told by Collins himself along with many others who knew and worked with Fela. This is a wonderful addition to the literature on Fela that reveals the complexity of the man and his role as a giant of modern African music, told by someone who was on the scene with Fela in the 1970s and who knew just the right angles to pursue.”
—Michael E. Veal, author of Fela: The Life and Times of an African Musical Icon

“This book assumes a unique place in the Fela literary canon because of its author, a man with the perspective, knowledge, and access to Fela’s story to render it with the style of a novelist, the precision and detail of a historian, and the musical insight of an insider to the creative process.”
—Banning Eyre, from the foreword