“The higher we go, the more glorious our death will be!”

Everyone’s heard of Amelia Earheart, the first female to fly solo across the Atlantic. But have you heard of Sophie Blanchard, our Woman Crush Wednesday honoree? 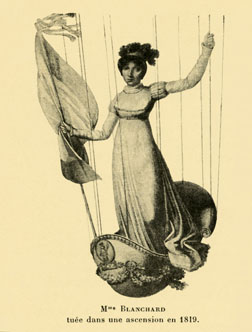 This French balloonist was the profession’s first female flyer, who carried off sixty-seven successful ascensions. Her daring contributions to ballooning did not go unnoticed—she was appreciated by Napoleon Bonaparte and Louis XVIII, and she was known throughout the country as a world-class aeronaut. Madame Blanchard was immortalized in Jules Verne’s Five Weeks in A Balloon, and she is rightfully included in the “Gallery of Heroes” found in Wesleyan University Press’s edition of the classic novel. In the book, her unfortunate death was described as follows: “her balloon caught on fire while she was setting of fireworks, but she didn’t fall out of the sky, and she probably wouldn’t have been killed if her gondola hadn’t banged into a chimney and thrown her to the ground.”

Five Weeks in a Balloon was Jules Verne’s first published novel, and is often praised as one of his best. It was among his most popular, bestselling books—cashing in on the French craze of ballooning and public interest in African exploration. Verne offers a fantastical story based on the realities of aeronautical technology and geographical exploration of his day. As one would imagine, Verne had a love for geography and exploration, and he was knowledgable about both subjects. He also worked contemporary politics into his stories. Issues of race and slavery are touched on in Five Weeks in a Balloon, set at the dawn of European imperialistic aggressions on the continent of Africa, as exploration shifted to violent colonization.

Verne’s weaving of scientific discovery, speculation, and adventure is what earned him the moniker “Father of Science Fiction.” In addition to touching on the technology and politics of the day, and thinking about the future, Verne also tells a good story. Five Weeks in a Balloon gives a fictional account early air-adventures, touching on some real events and people of the day, including Sophie Blanchard.

Enter a drawing to win a free copy of Five Weeks in a Balloon here!