A comparative study of the music cultures of four radical groups

Radicalism and Music offers a convincing argument for music’s transformational impact on the radicalization, reinforcement, and motivational techniques of violent political activists. It makes a case for the careful examination of music’s roles in radical cultures, roles that have serious impacts, as evidenced by the actions of the Frankfurt Airport shooter Arid Uka, Sikh Temple murderer Wade Page, white supremacist Matthew Hale, and animal-rights activist Walter Bond, among others. Such cases bring up difficult questions about how those involved in radical groups can be stirred to feel or act under the influence of music.

Radicalism and Music is based on interviews, email correspondence, concerts, and videos. As a “sound strategy,” music is exploited to its fullest potential as a tool for recruiting and retaining members by members of al-Qa’ida, the Hammerskin Nation, Christian Identity, Kids in Ministry International, Earth First!, and Vegan Straight Edge. But, as the book points out, the coercive use of music is not isolated to radical cultures, but in political propaganda, sporting events, and popular music as well. Ultimately, Radicalism and Music shows how music affects us through our emotions, and how it triggers violence and enables hateful ideology. 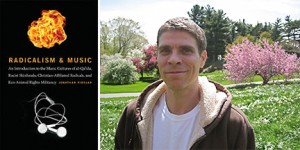 JONATHAN PIESLAK is an associate professor at the City College of New York and the Graduate Center, CUNY. He is the author of Sound Targets: American Soldiers and Music in the Iraq War.

Listen to interviews with the author here:
To the Best of Our Knowledge
WAMC’s The Academic Minute
The Mike Huckabee Show

“Radicalism and Music is a compelling read, rigorously researched and accessible to the interested reader. Pieslak is to be commended for his neutral approach: he comes across as intellectually intimate with his subjects without being committed to their respective agenda or passing judgment.”
—Nelly Lahoud, author of The Jihadis’ Path to Self-Destruction

“Radicalism and Music is a well-argued foil to the notion that music is a universal language that brings people together. The subtheme of music and its relationship to the Internet provides important groundwork for thinking of music as a particular ‘information technology’ without divorcing it from its ritual function.”
—Benjamin J. Harbert, coeditor of The Arab Avant-Garde: Music, Politics, Modernity

“Pieslak’s work reveals uses of music that are questionable and discomforting and thus rarely studied. By skillfully comparing music’s role in a range of extremist cultures, Pieslak remaps the bounds of human musicality, showing how music’s social and emotional power can inspire violence as much as community, cultivate hatred as much as beauty.”
–Daniel Cavicchi, author of Listening and Longing: Music Lovers in the Age of Barnum