Wesleyan is pleased to announce that Joseph Ceravolo’s Collected Poems, edited by Rosemary Ceravolo and Parker Smathers, is now available in paperback.

Like an underground river, the astonishing poems of Joseph Ceravolo have nurtured American poetry for fifty years, a presence deeply felt but largely invisible. The Collected Poems offers the first full portrait of Ceravolo’s aesthetic trajectory, bringing to light the highly original voice that was operating at an increasing remove from the currents of the time. From a poetics associated with Frank O’Hara and John Ashbery to an ever more contemplative, deeply visionary poetics similar in sensibility to Zen and Dante, William Blake and St. John of the Cross, this collection shows how Ceravolo’s poetry takes on a direct, quiet lyricism: intensely dedicated to the natural and spiritual life of the individual. As Ron Silliman notes, Ceravolo’s later work reveals him to be “one of the most emotionally open, vulnerable and self-knowing poets of his generation.” Many new pieces, including the masterful long poem “The Hellgate,” are published here for the first time. This volume is a landmark edition for American poetry. 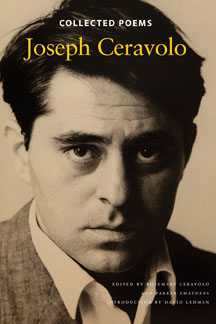 Joseph Ceravolo (1934–1988) was a poet and civil engineer who was born in Astoria, Queens, and lived in New Jersey. He was the author of six books of poetry, and won the first Frank O’Hara Award. Rosemary Ceravolo is an artist, novelist, and art critic. She lives in Bloomfield, New Jersey. Parker Smathers is a poet and editor at Wesleyan University Press.

This project is supported in part by an award from the National Endowment for the Arts.

Praise for The Collected Poems:

“Fascinating, unwieldy, and sometimes sublime . . . this first collected for the New Jersey–based Ceravolo reveals a poet wilder—and potentially far more popular—than the one all but a few strong admirers know. . . . This big book will spark new interest; it might even attract fans of Rumi, or of the Beats.”
—Publishers Weekly

“‘The overlooked genius of American poetry,’ as David Lethem states in the introduction, Ceravolo emerges from the opening poems of his first book, Fits of Dawn, as speech churns sound and meaning goes ’round and ’round—‘Mounting!/ O dive! song song restay fairness of/ dawn. That cry of/ booze that sparrow/ of soul ‘miradel’/ unique justly lotus/ nothingless char of sunday./ Vicious of moon for the actual./ Live digress.’ His first-ever collected; essential.”
—Barbara Hoffert, Library Journal

“Ceravolo transcends the canon…[his] verse is at once classical and fresh, tender and profound, succinct and expansive, tantalizingly parseable yet divinely ineffable. It would take a lifetime of expert reading to fully appreciate this lifetime of superlative writing; with the long-awaited publication of a collected Ceravolo, America’s contemporary poetry readers now have the opportunity to do their part.”
—Seth Abramson, Huffington Post

“This haunting tome is a masterpiece, a complex concerto of poems moving on a visionary trajectory. One feels the playful bounce of the spirit therein, its attenuated suffering and redemption through poetry. Joe Ceravolo—an underground legend for years since his untimely death—rises again in fuller and deeper flower. We need this generative work in our world more than ever now. Ceravolo is a mystic of the highest order.”
—Anne Waldman

“Joseph Ceravolo’s poetry has until now been known only to a small but devoted public, much of it centered at the downtown St. Mark’s Poetry Project in Manhattan. Now, with this splendid edition of his collected poems, many of them previously unpublished, a wider audience can discover what has been a much too well-kept secret. Ceravolo’s work is rich, strange, and quite unlike anyone else’s, a ‘Romance of Awakening.’”
—John Ashbery

“Joseph Ceravolo’s poetry, like the very best poetry, is at once timeless and contemporary, magical and truthful, visionary and real. One never ceases to be moved and astonished by his highly original poetics. His work is always revelatory. Always.”
—Peter Gizzi