This morning we woke to the sad news that James Tate has passed on. To honor Tate, this week’s Throwback Thursday selection is “Aunt Edna” from Selected Poems (1991), winner of the 1992 Pulitzer Prize for Poetry and the William Carlos Williams award. In addition to Selected Poems, Wesleyan also published Tate’s 1990 volume, Distance from Loved Ones. Tate was a friend to Wesleyan University Press, and was a dedicated writing professor at the University of Massachusetts, Amherst. He will be greatly missed by the poetry community and his students. We send our condolences to Tate’s wife, fellow poet and professor, Dara Wier. 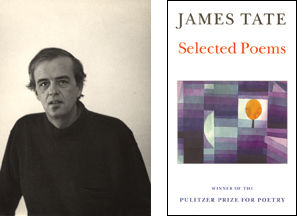 Aunt Edna of the hills
comes down to give
her sisters chills;

she wears the same
rags she wore
seven years ago,

is-here stories.
She hates flowers,
she hates the glory

of the church she
abandoned for the
glory

of her Ozark cave.
She gave
her sons to the wolves.

JAMES TATE was the author of fifteen books of poetry and three of prose, including Worshipful Company of Fletchers (1994), which won the National Book Award. His other honors included an Academy of American Poets chancellorship, a National Institute of Arts and Letters Award for Poetry, the Wallace Stevens Award, and fellowships from the Guggenheim Foundation and the National Endowment for the Arts. He taught at the University of Massachusetts in Amherst.