To celebrate, we share with you a Wesleyan University Press Pride Reading List. These titles are by LGBTQ+ authors or detail an important aspect of LGBTQ+ history and culture. The LGBTQ+ community has made immense contributions and these texts are just one way in which we can see that influence. We are proud to support LGBTQ+ authors, readers, and stories—during June and always. 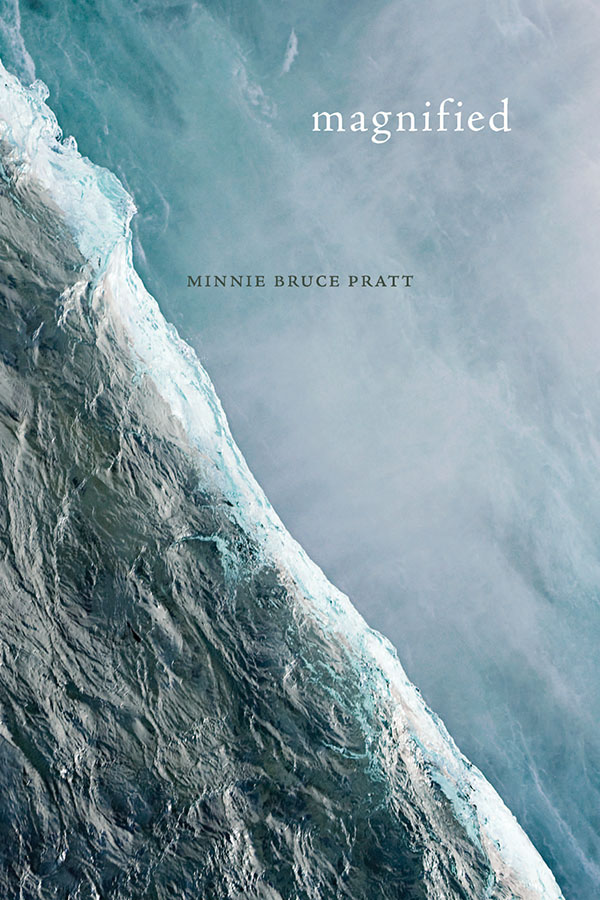 Once in a blue moon, a love like this comes along….

“The poems in Magnified model a fearless relation with lost beloveds that is gorgeous, queer and fiercely alive. Minnie Bruce Pratt, who always writes verse with palpating radical breath, here ignites it with a vision for revolutionary afterlife.”
—Rachel Levitsky, author of The Story of My Accident Is Ours

Magnified is a collection of love poems drawing us into the sacred liminal space that surrounds death. With her beloved gravely ill, poet and activist Minnie Bruce Pratt turns to daily walks and writing to find a way to go on in a world where injustice brings so much loss and death. Each poem is a pocket lens “to swivel out and magnify” the beauty in “the little glints, insignificant” that catch her eye. 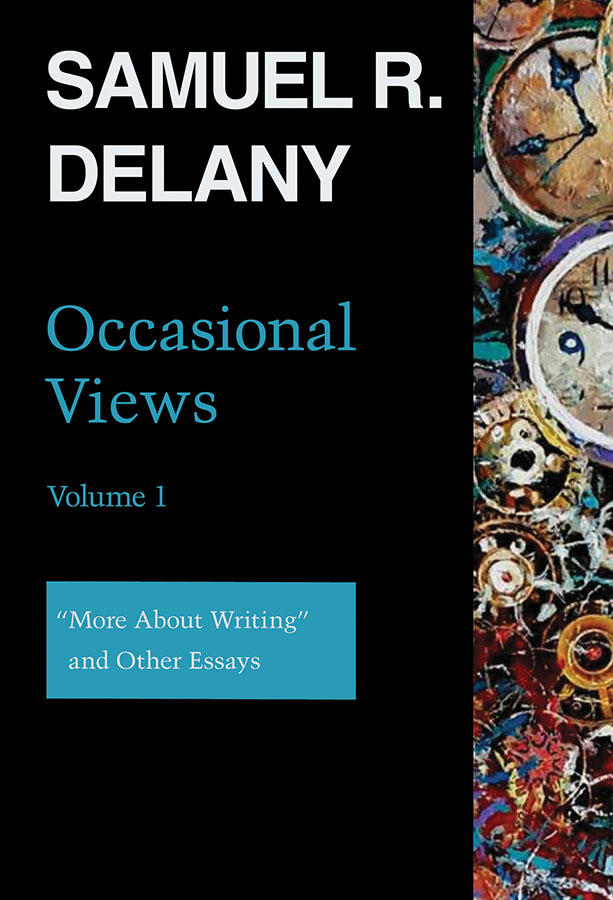 Essays and occasional writings from one of literature’s iconic voices

“By turns gutsy and erudite, challenging and gracious, Delany’s Occasional Views gives illuminating glances of his mind’s life journey. How lucky we are to have these proofs of the resonant truths he has discovered along the way!”
—Nisi Shawl, author of Everfair

Essays, lectures, and interviews address topics such as 9/11, race, the garden of Eden, the interplay of life and writing, and notes on other writers such as Theodore Sturgeon, Hart Crane, Ursula K. Le Guin, Hölderlin, and an introduction to—and a conversation with—Octavia E. Butler. 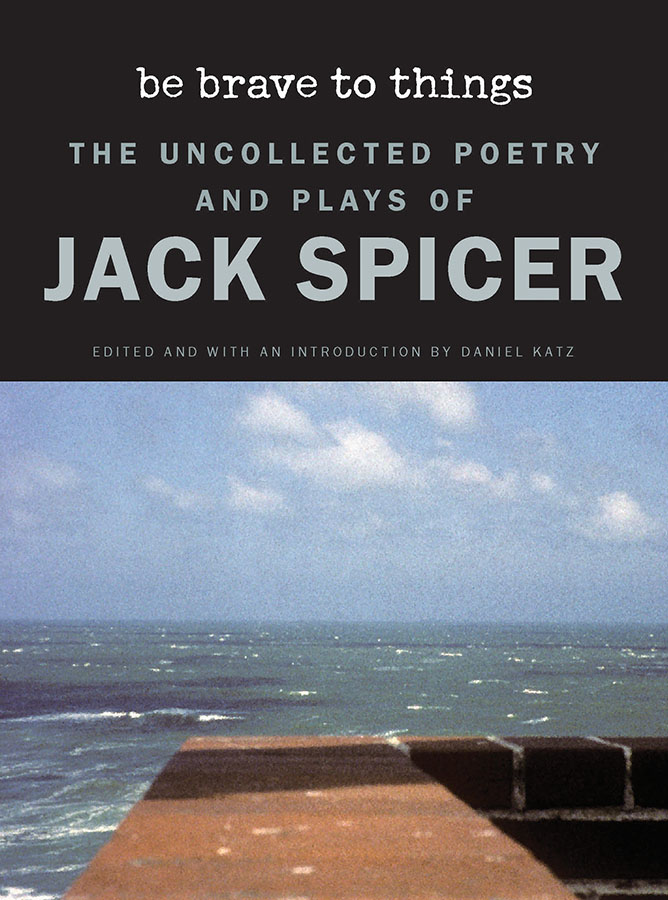 Indispensable volume of previously unavailable poetry by an American master

“Have you read a poet and suddenly feel the shoulders you stand on? Jack Spicer does this to many of us, and now there are more poems! Oh, more treasure! Magic is not a metaphor, and ‘Time does not finish a poem.’ Jack says, ‘Like a herd of reindeer / No one knows your heart.”
—CAConrad

Includes major unfinished projects, early and alternate versions of well-known Spicer poems, shimmering stand-alone lyrics, and intricate extended “books” and serial poems. This new cache of Spicer material will be indispensable for any student of 20th century American poetry, proffering a trove of primary material for Spicer’s growing readership to savor and enjoy. 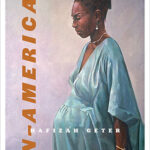 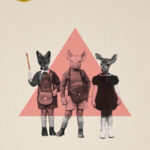 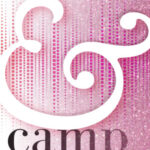 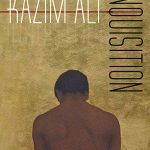 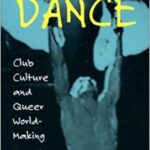 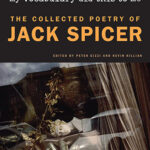 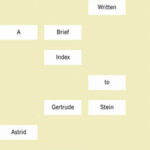 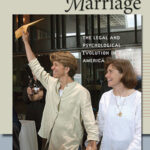 bury it by sam sax

Occasional Views Volume 1: “More About Writing” and Other Essays by Samuel R Delany

My Vocabulary Did This to Me: The Collected Poetry of Jack Spicer

Be Brave to Things: The Uncollected Poetry and Plays of Jack Spicer

How Reading Is Written: A Brief Index to Gertrude Stein by Astrid Lorange

In honor of beloved Leslie Feinberg for Pride Month. Hir last words were "Remember me as a revolutionary communist." #Onward twitter.com/Pinko_the_Bear… Retweeted by weslpress

There’s a visible landscape we all see. And there exists an invisible landscape that not only grounds us but is also a conduit of mind. Perhaps those roots reaching out through the earth are an image of fate... via @RainTaxiReview @aiww @weslpress raintaxi.com/a-landscape-of… Retweeted by weslpress

Enjoying our “Imagining the Age of Phillis” short film series? Be sure to join us on Tuesday, June 15th at 6PM, for a panel discussion featuring poet @BlkLibraryGirl, director John Oluwole ADEkoje, and producer @patrickgabridge. Register FREE: revolutionaryspaces.org/2021/05/27/age… Retweeted by weslpress 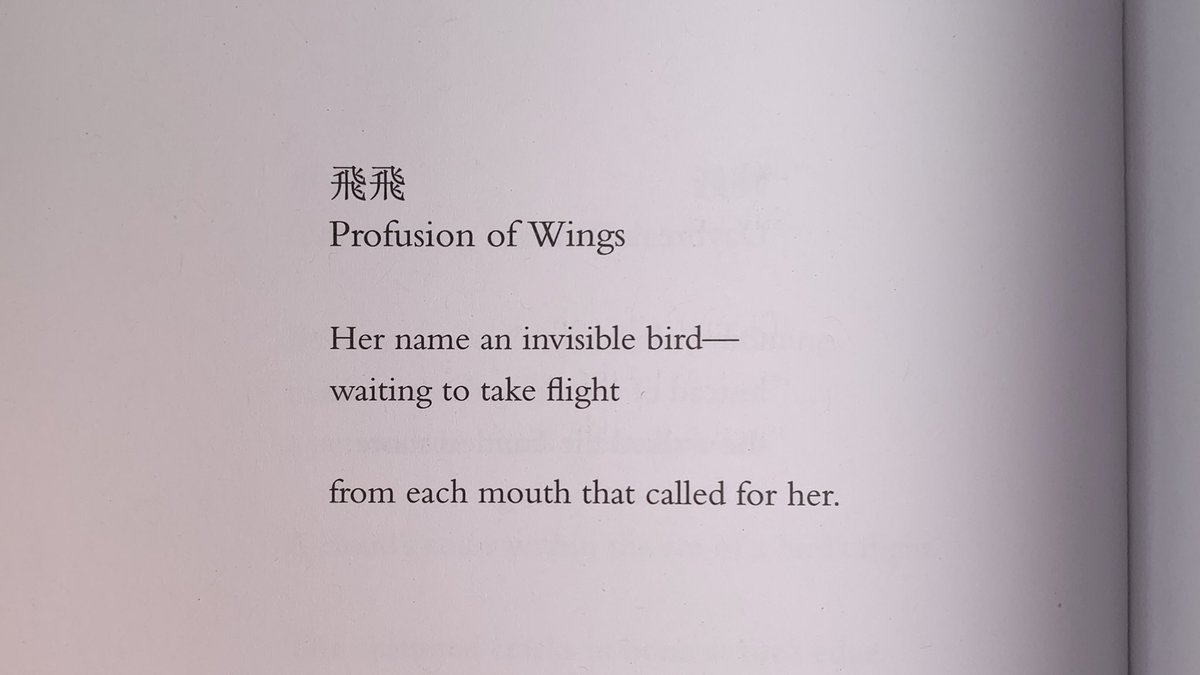 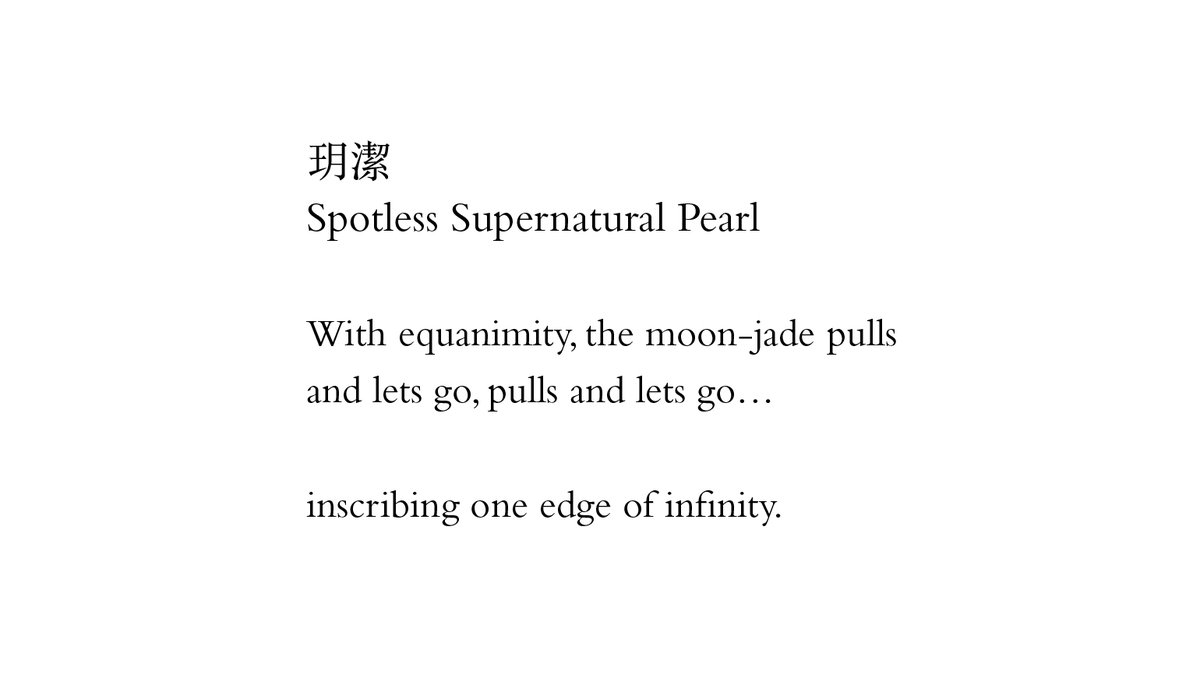 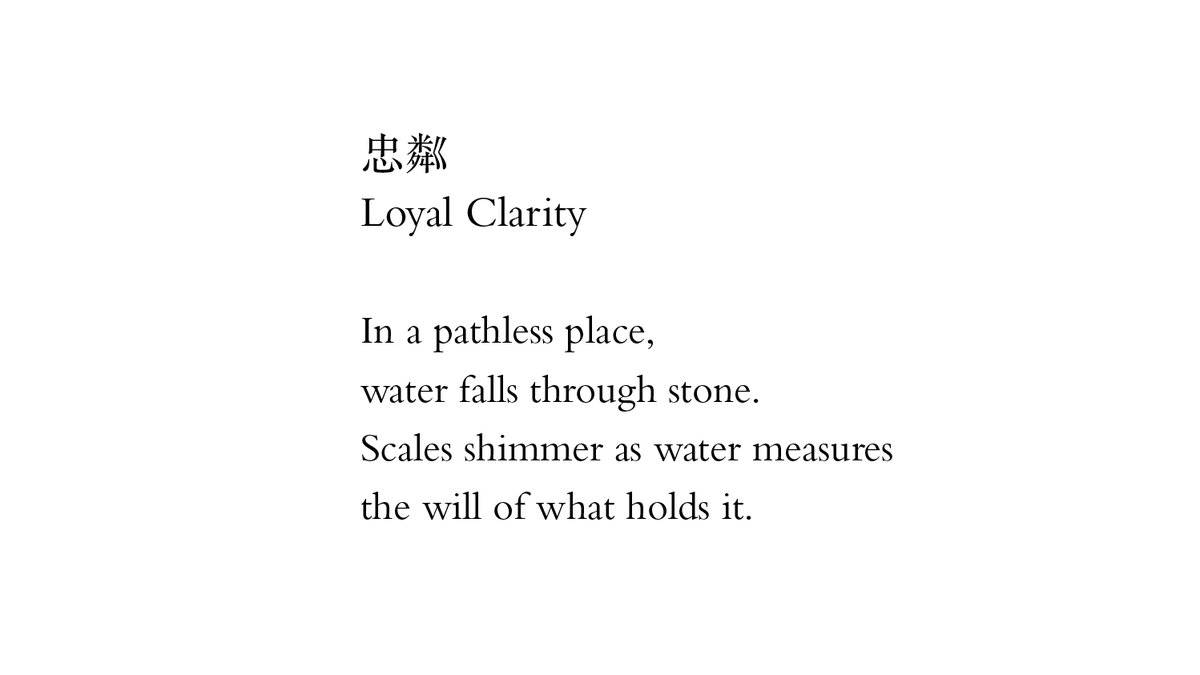 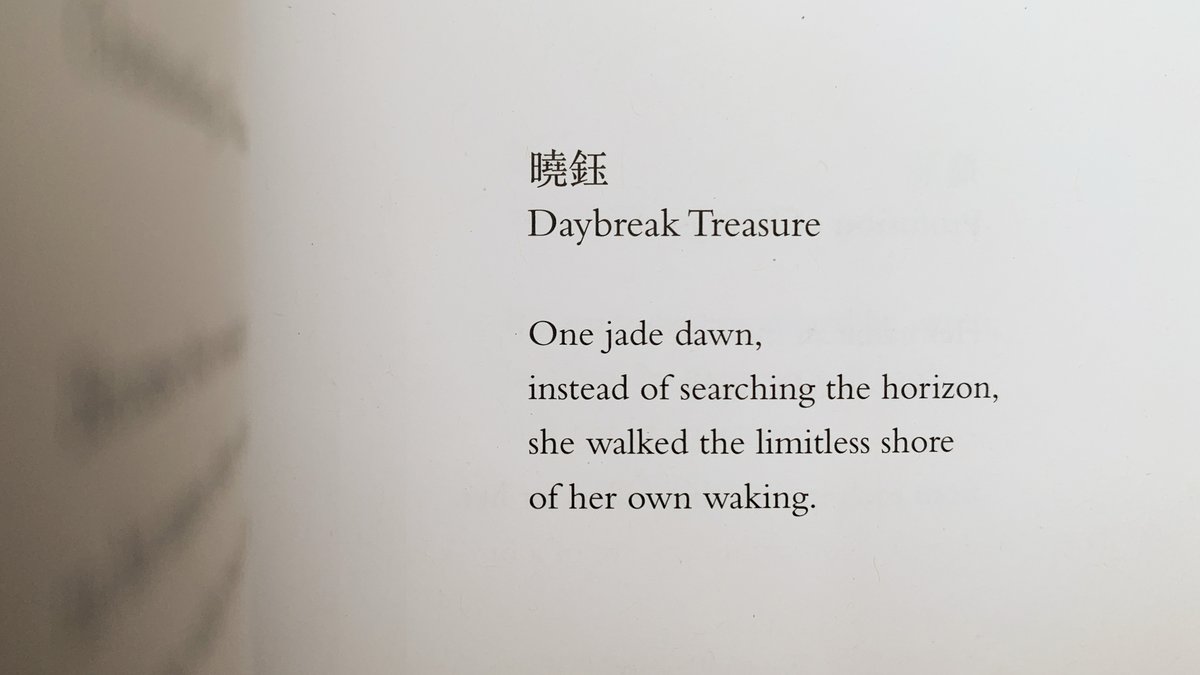 "The Past" probes the multi-generational binds of family, displacement, and immigration as an ongoing psychic experience without end. Coming in September. #Tienanmen #Dignity #HumanRights #Memory (June 4th marks the anniversary of the Tiananmen Square Protests)

ALERT: On 6/9 at 7 pm ET, join us for our next Digital Talk as Dr. Honorée Fanonne Jeffers (@BlkLibraryGirl) chats with @GWBooks' @JamesPAmbuske about her book, The Age of Phillis, an exploration in poetry & prose of Phillis Wheatley's Revolutionary Life: bit.ly/3pjEFmn Retweeted by weslpress 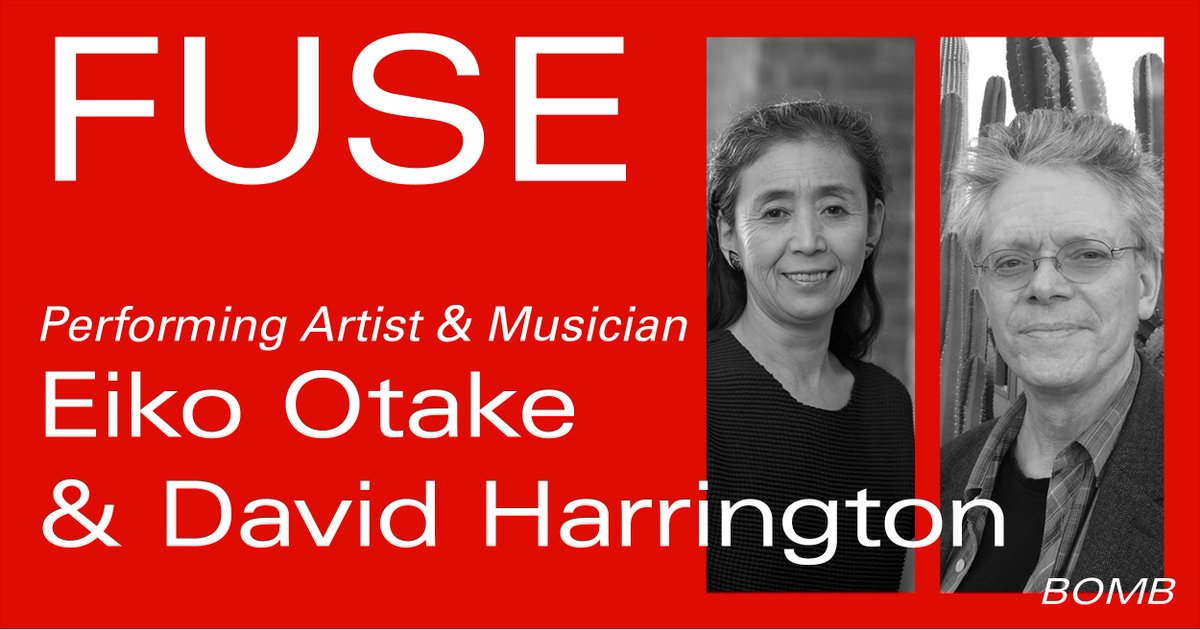 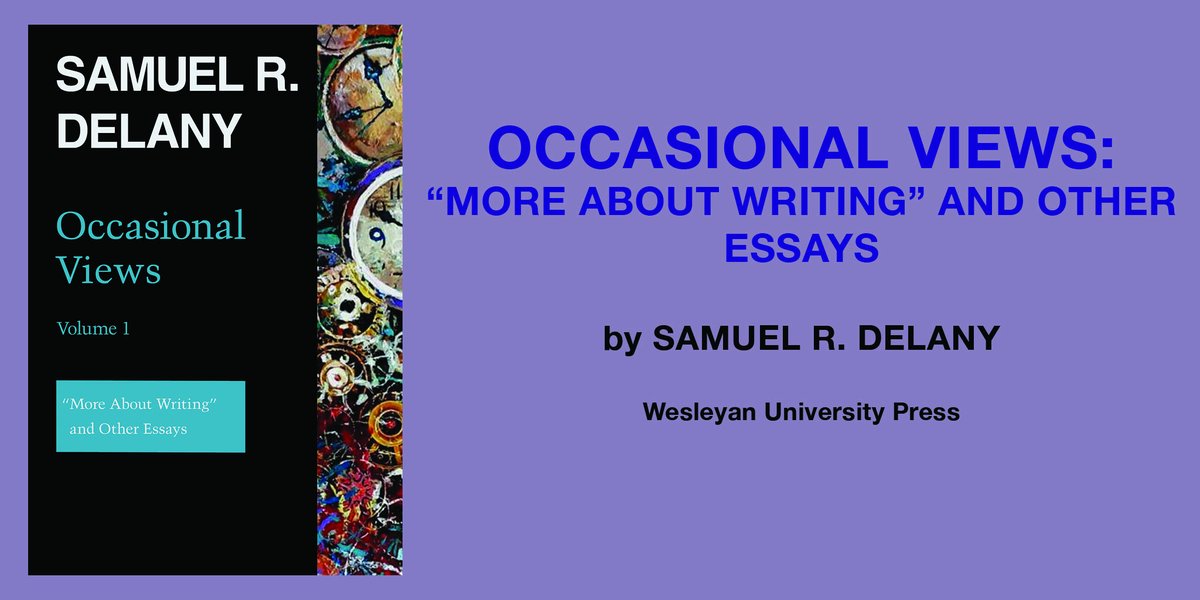 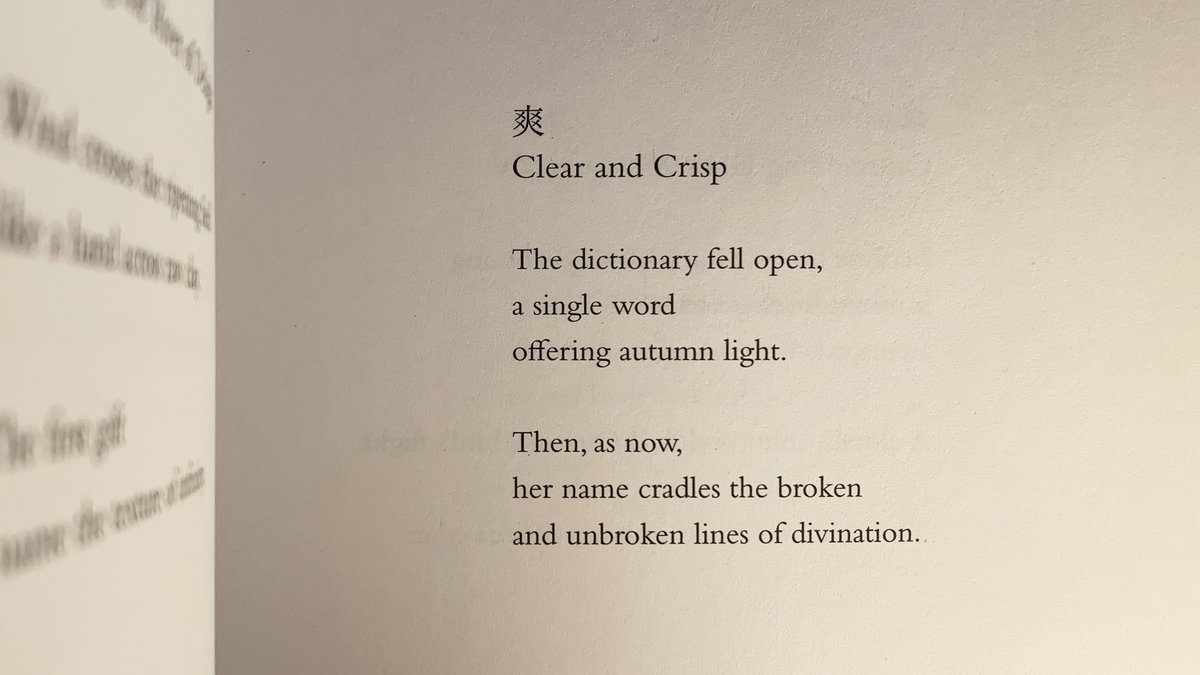 "Oscillating across dance and photography, movement and stillness, poetry and prose, history and the everyday, anger and hope—a stunning testament to both the beauty and sadness of Fukushima."—Takashi Fujitani Free / Register: nyuskirball.org/events/body-fu… #Eiko #Fukushima #Remember 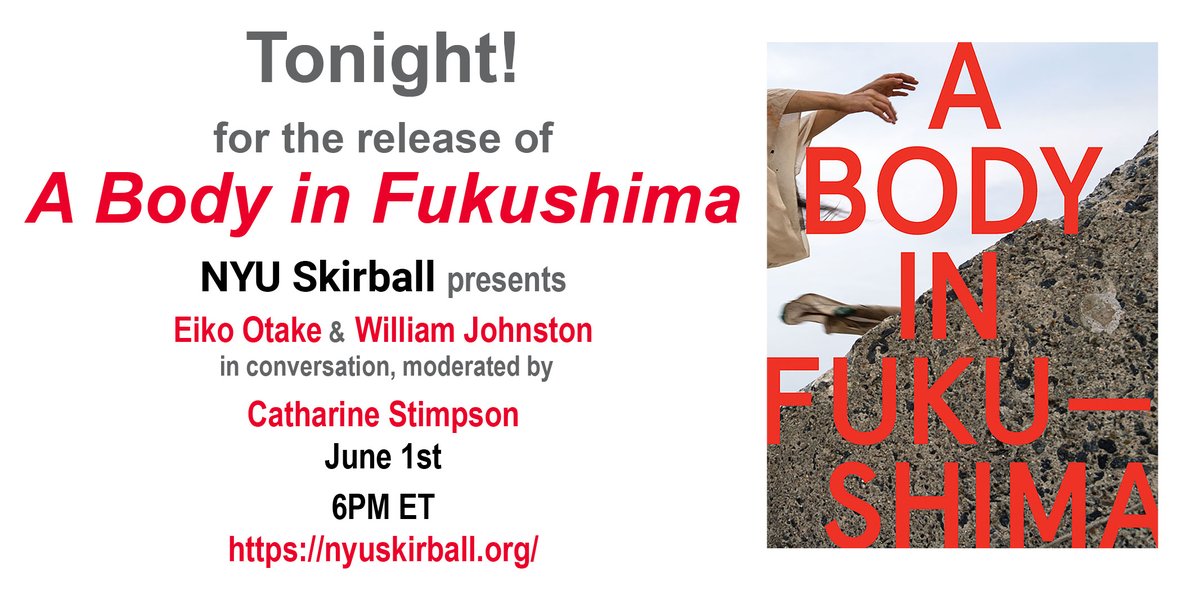 Walt Whitman contemplating the sound of his own name... Born on this day, in 1819. #AForestOfNames @weslpress Retweeted by weslpress

We have a new episode of FUSE coming soon, featuring the performance artist Eiko Otake with David Harrington of the Kronos Quartet. Otake's new book, A BODY IN FUKUSHIMA, is also out tomorrow—check out her book release event with @nyuskirball. nyuskirball.org/events/body-fu… Retweeted by weslpress

Brenda Hillman. “no one but you knows what occurred / in the dress you wore in the dream / of atonement” Retweeted by weslpress

May 27. Today is the birthday of Crossing the River of Delight. 🙏 #AForestOfNames #512Birthday @weslpress @aiww Retweeted by weslpress

Remembering Anna Halprin, who passed away at her home on May 24, at age 100. Halprin made great strides in the democratization of dance. #danceforall #powerofdance #annahalprin Read more datebook.sfchronicle.com/dance/anna-hal… 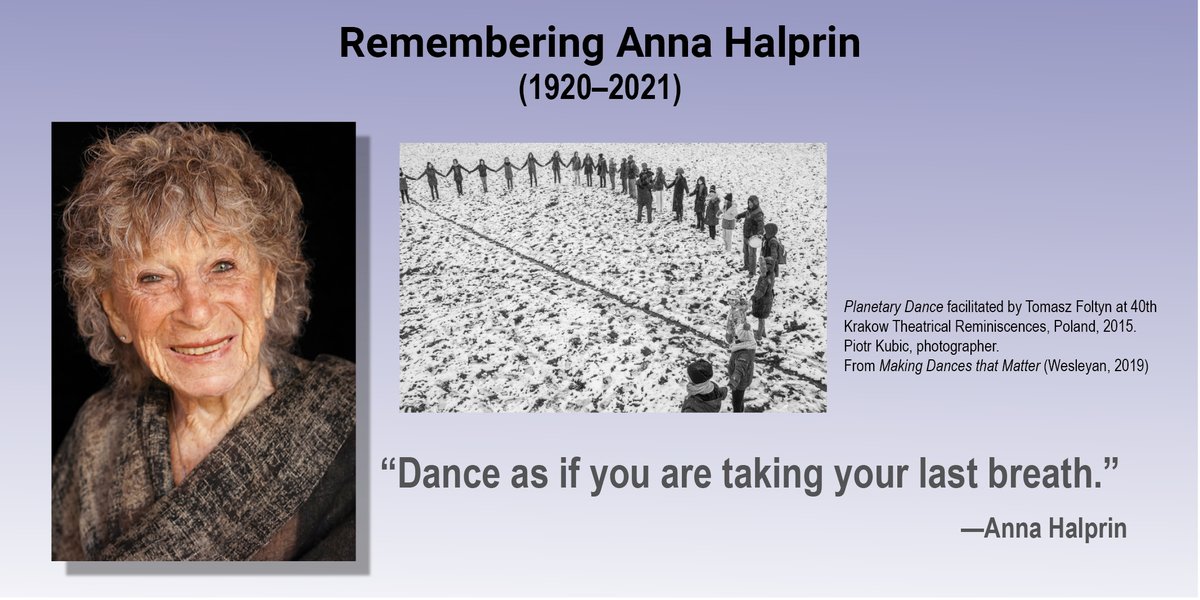 Famous interpretive dancer Isadora Duncan was born #OTD in #SanFrancisco, #CA in 1878. You can read an autobiography of one of the “Isadorables,” Duncan’s group of six adopted protegées, made publicly available through an #NEHgrant to @weslpress: bit.ly/3fzf9VO Retweeted by weslpress

If anyone is looking for a creative writing job, there are still some openings out there, particularly in the UK. Please read on if you are looking, and good luck! Retweeted by weslpress

May 21. Today is the birthday of Made New by the Moon. #AForestOfNames #512Birthday @weslpress @aiww Retweeted by weslpress

Books by Rae Armantrout: "Itself" and an Italian edition of "Just Saying". (May 20, 2015) #Tbt #raearmantrout #poetryintranslation #italian #languagepoets #translation #bookcoverart 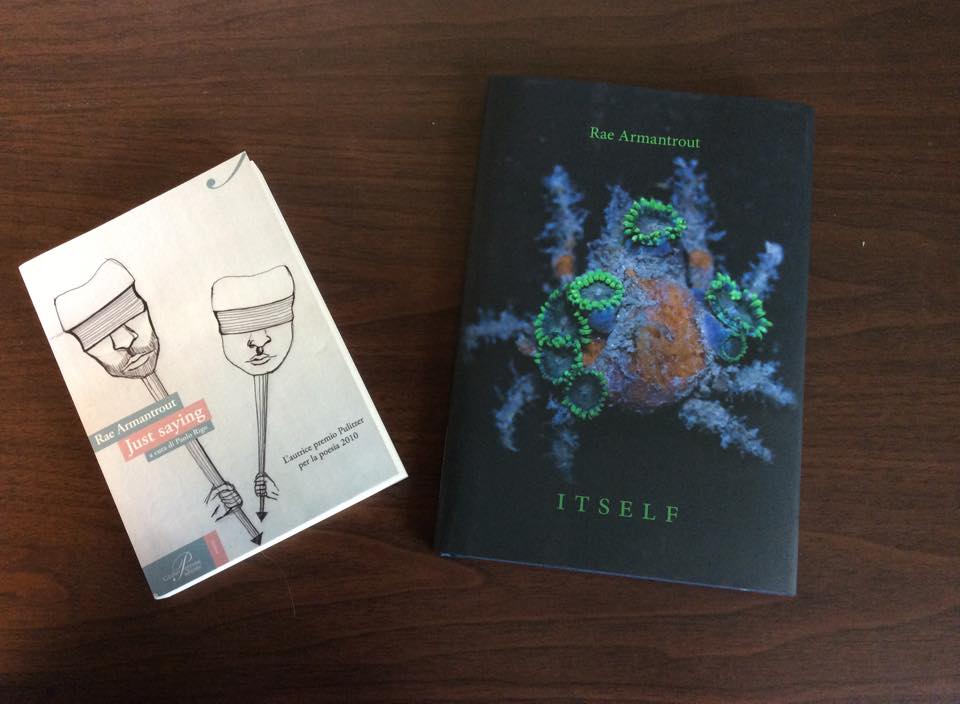 "One way to fight propaganda is to read in the dark quietly by yourself. And this is like a Buddhist practice. Buddhists spend a lifetime trying not to become stuck in some unthinkable situation." —@aiwwhttps://t.co/L65pBQb1Ho

"Each of us is perfectly built and capable to love. But one doesn’t own love. Love is a common property, just like freedom." —@aiww ianboyden.com/posts/present-… Retweeted by weslpress

@Helen_E_Shaw We wonder if you'd like a review copy of "A Body in Fukushima" by Eiko Otake and William Johnston? Thank you!

Ian Boyden '95 wrote about his poetry honoring the victims of the 2008 Sichuan earthquake. "The challenge was not to just translate the names but to give them an enduring language both to mark the loss and to insist on having the children be recognized." fal.cn/3fl68 Retweeted by weslpress

May 14. Today is the birthday of Daybreak Kingfisher. #AForestOfNames #512Birthday Retweeted by weslpress 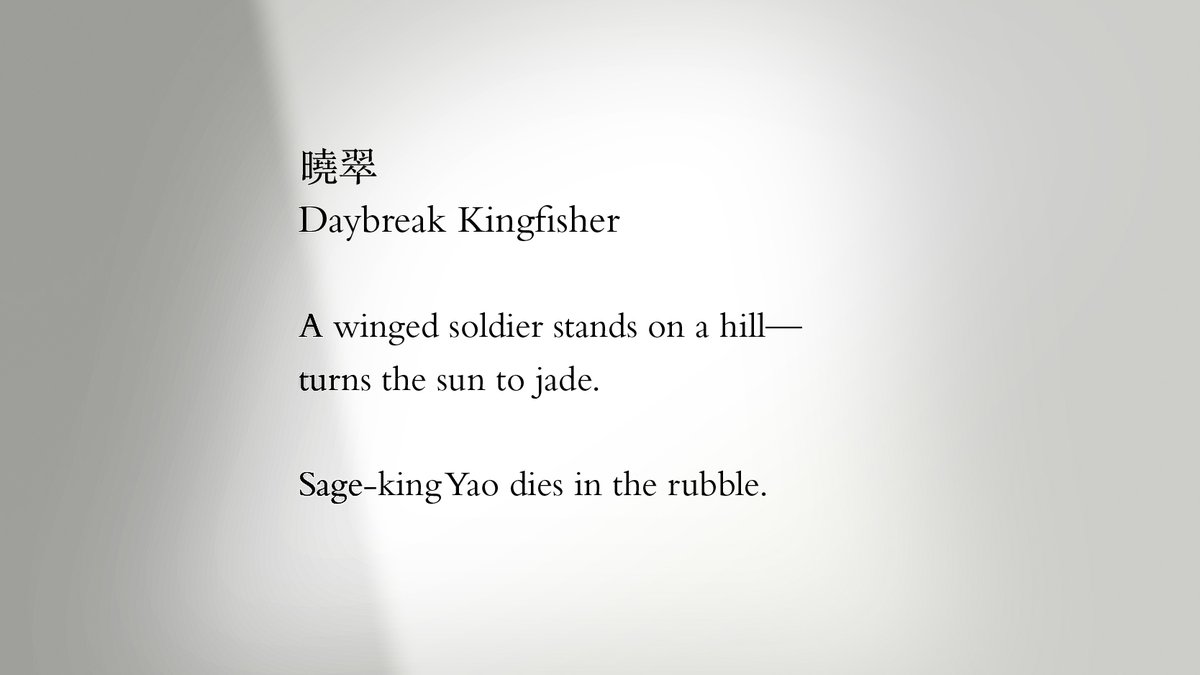 It's a good day to open this book! ❤️🙏 Retweeted by weslpress 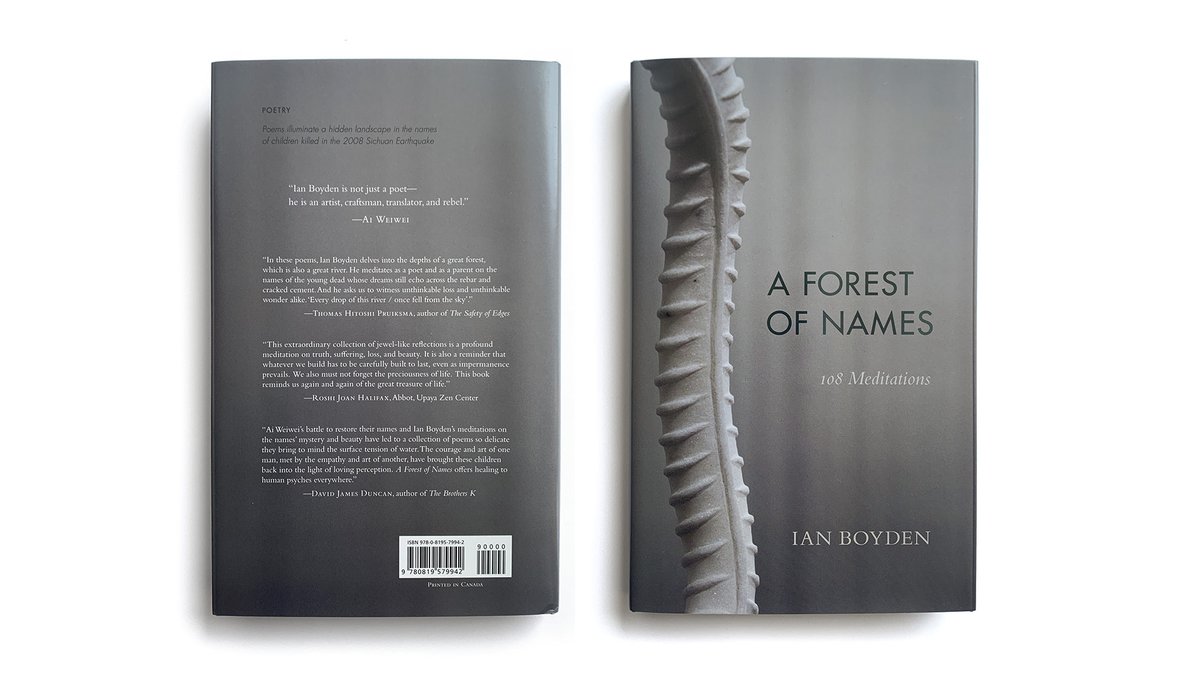 I am once again asking you to check out my Goings On About Town picks for The @NewYorker. First, celebrate @alvinlucier turning 90 from wherever you are, with a 26-hour all-star "I am sitting in a room" online marathon presented by @issueproject Room… newyorker.com/goings-on-abou… Retweeted by weslpress

Alvin Lucier, an ⁦@wesleyan_u⁩ & international treasure “Are you the guy who wrote the piece about sitting in a room? My kids love it. You are ahead of your time.’” #WesCreative via ⁦@nytimesarts⁩ nytimes.com/2021/05/11/art… Retweeted by weslpress

月新 Made New by the Moon She came with her chisels and carved, month after month, until the tree was a thousand feet of moonlight. #AForestOfNames @weslpress twitter.com/_IanBoyden/sta… Retweeted by weslpress

Have questions about finding a publisher for new work? Pitching a republication? Licensing a translation? #AskUP has answers, provided this spring by @FordhamPress bit.ly/3milXtt #ReadUP Retweeted by weslpress 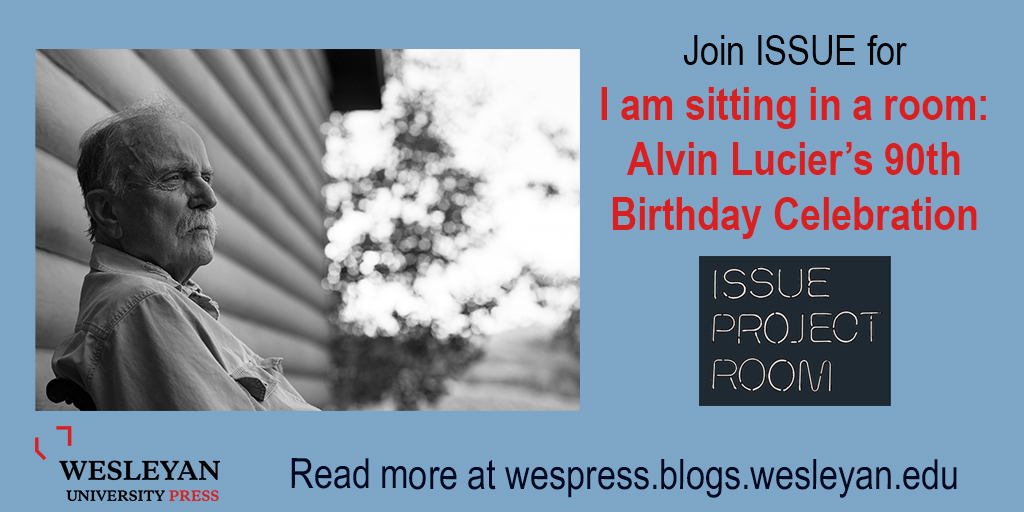 Thank you for this! Your story is a blessing, published yesterday, the day I felt compelled to write a choral piece based on your poem for her, and it flowed through. I offer my deep appreciation for your book, A FOREST OF NAMES, by writing music. 😍

How do we honor, remember the dead? “A Forest of Names” is a tribute to the more than 5000 children lost, whose identities the government brutally suppressed. #AForestofNames #sichuanearthquake #Names #AiWeiWei #memory #accountability #infrastructure #dignity #safety 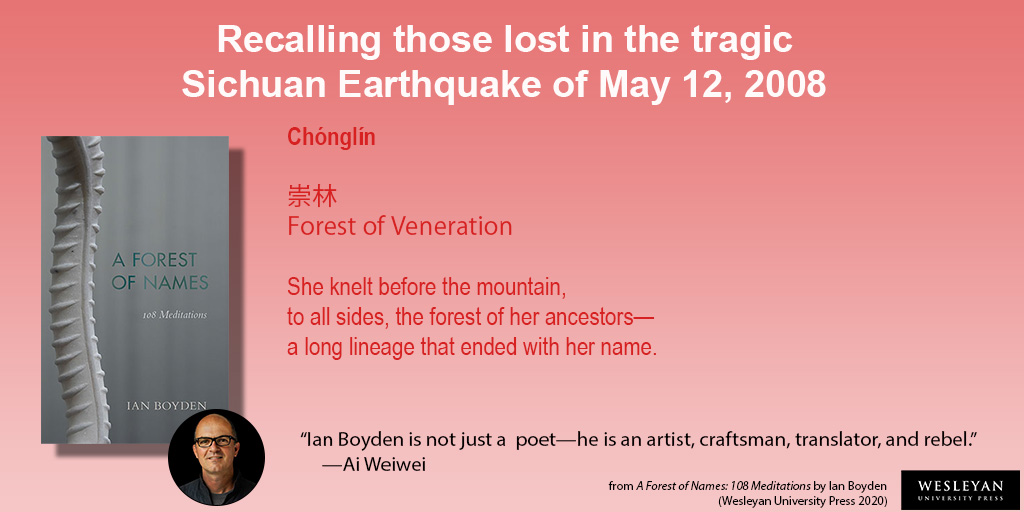 Ian: Removed from a living being, names become very abstract. @aiww: It's like you pick up a seahorse on the beach, but you don't know what this strange creature is. It has dried out, maybe it’s just a broken seahorse…. You try to imagine what it is, what it was like. twitter.com/_IanBoyden/sta… Retweeted by weslpress

"If any of these children were still alive, you couldn't imagine what their life would be like." —@aiww Retweeted by weslpress

This essay contemplates a child named Made New by the Moon and an evening I spent spent in the town of Yingxiu, Sichuan, the town of her birth, and which years later would be epicenter of the 2008 #WenchuanEarthquake. magazine.blogs.wesleyan.edu/2021/05/11/mad… #AForestOfNames @weslpress Retweeted by weslpress