“Mr. Manstan has captured a critical part of our nation’s history and role in preserving world peace by telling the story of those in the background whose toils and untold stories made it possible for a war-torn world to survive.”—Dr. Peter “Skip” Scheifele, University of Cincinnati 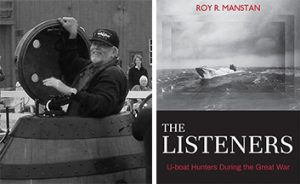 Roy R. Manstan’s new book, The Listeners: U-boat Hunters During the Great War, details the struggle to find a solution to the unanticipated efficiency of the German U-boat as an undersea predator during World War I. Success or failure was in the hands and minds of the scientists and naval personnel at the Naval Experimental Station in New London, Connecticut. Through the use of archival materials, personal papers, and memoirs, The Listeners takes readers into the world of the civilian scientists, engineers and naval personnel who were directly involved with the development and use of submarine detection technology during the war.

Roy R. Manstan is the co-author of Turtle: David Bushnell’s Revolutionary Vessel and author of Cold Warriors: The Navy’s Engineering and Diving Support Unit. He lives in East Haddam, CT.