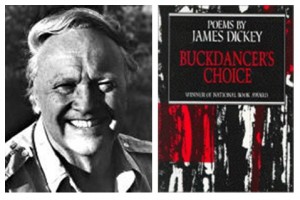 In the bush-thorns hung like a scarf,
The silver sharp creek
Cut; off yonder, fox feet
Went printing into the dark: there,
In the other wood,

The uncornered animal’s running
Is half floating off
Upon instinct. Sails spread, fox wings
Lift him alive over gullies,
Hair tips all over him lightly

Touched with the moon’s red silver,
Back-hearing around
The stream of his body the tongue of hounds,
Feather him. In his own animal sun
Made of human moonlight,

He flies like a bolt running home,
Whose passage kills the current in the river,
Whose track through the cornfield shakes
The symmetry from the rows.
Once shot, he dives through a bush

And disappears into air.
That is the bush in my hand
Went deeply through as I followed.
Like a wild hammer blazed my right thumb
On the flashlight and moonlight

And dried to one drop
Of fox blood I nail-polished in,
That lopsided animal sun
Over the nearly buried
Or rising human half-moon,

My glassed skin half mooning wrongly.
Between them, the logging road, the stopped
Stream, the disappearance into
The one bush’s common, foreseen
Superhuman door:

All this where I nailed it,
With my wife’s nailbrush, on my finger,
To keep, not under, but over
My thumb, a hammering day-and-night sign
Of that country.

JAMES DICKEY (1923-1997), best known for his novel Deliverance, was a prolific poet and novelist as well as a critic and teacher. He served as the eighteenth U.S. Poet Laureate, and was awarded the National Book Award and the Order of the South Award.